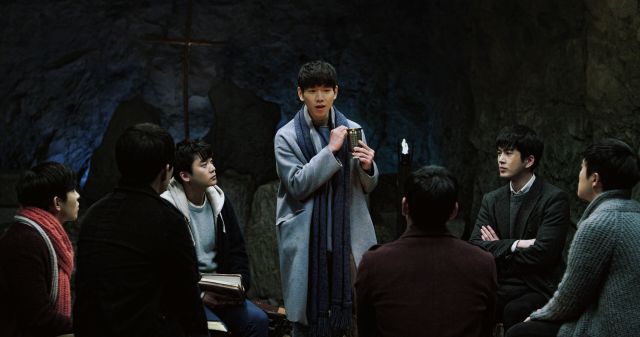 Director Daehae is a Buddhist nun. This may be seem counter-intuitive, given that "Sermon on the Mount" is, as the title implies, a movie about Christian theology. The runtime consists almost entirely of a bunch of seminary students sitting around in a cave casually discussing and debating various liturgy. There are frequent references to the more arcane aspects of religious belief, simplified into relatable analogies of great use to the believer and the non-believer alike.

So why would a Buddhist nun, of all people, be interested in subject matter that would be more obviously well-suited to South Korea's domestic Christian film market? Well, it's because Daehae sincerely believes that all world religions have a lot in common. It's just the differences that are frequently emphasized because of unscrupulous people. The entire segment explaining Jesus' teachings regarding the tree which bears poisonous fruit goes into this, albeit indirectly. The idea is more conceptual than it is literal.

Also consider the discussion of the golden cup as relates to the Father, the Son, and the Holy Ghost. God exists in multiple forms, some literal, some identifiable, and other transient. So just as the golden cup is a drinking implement, and also made of metal, and also of financial value, so too does God exist in multiple forms. They just can't be processed in the same way at the same time, because of the limited faculties inherent in humans.

Another section goes into the question of whether humans exist to serve God or God exists to serve humans. The Socratic nature by which "Sermon on the Mount" phrases these questions is such that first of all, you should really ask yourself that question, and carefully consider how you came to your answer. Bear in mind that the exact form of God, for the sake of argument is fairly critical, because God in different forms serves different purposes.

As technically challenging as all these questions may sound rest assured, "Sermon on the Mount" does it best to simplify the subject matter without dumbing it down. The movie is a sort of connect the dots exercise. It takes all these vague Christian concepts you have probably heard of, and ties them together in such away that the overall unity of the topic makes intuitive sense in a way it did not before. The answers to previous questions gain continuing relevance throughout the night as new questions rely on many of the same precepts.

These explanations make even more intuitive sense the more knowledge you have of other religions and their fundamental precepts. Hence how Daehae came to be so fascinated by the topic, and the possibility of using these and other educational connections to promote world peace. "Sermon on the Mount" is not Daehae's first film on the topic, although it's certainly her most ambitious, and has had a popular festival run spanning from Moscow to Seoul to Kazan to Dhaka. Really, if a group of people that diverse can find value in a Buddhist nun's interpetation of Catholic liturgy, why not you?

"Sermon on the Mount" is directed by Daehae and features Baek Seo-bin, Jung Joon-young, Oh Kyung-won and Park Chang-joon.

Staff writer. Has been writing articles for HanCinema since 2012, having lived in South Korea since 2011. Started out in Gyeongju, then to Daegu, then to Ansan, then to Yeongju, then to Seoul, lived on the road for HanCinema's travel diaries series in the summer of 2016, and is currently settled in Anyang. Has good tips for utilizing South Korea's public bus system. William Schwartz can be contacted via william@hancinema.net.

"[HanCinema's Film Review] "Sermon on the Mount""
by HanCinema is licensed under a Creative Commons Attribution-Share Alike 3.0 Unported License.